Dart - a possible solution to the high.cost@lowquality.webapp syndrome

Regarding user experience/performance, checkout this example of a (good!) server centric framework:

http://www.wicket-library.com/wicket-examples/ajax/tree/simple;jsessionid=1D907A232F857EEC0AA5D7D687D1F143?0
(no offence, Apache-Wicket is one of the best Web-Frameworks out there IMO).
if we go down the JavaScript route, we can do better:
http://www.jqwidgets.com/jquery-widgets-demo/demos/jqxgrid/index.htm?(arctic)#demos/jqxgrid/filtering.htm

However (having fiddled with JS myself) its suspicious: one can't resize any of the demo tables. Googling results in the following finding:

The Grid widget works with fixed width only which is specified by its ‘width’ property. It is not possible to set its width in percentages in this version. We’ll implement the requested feature for a future version.


So by the end of year 2013, it is still a problem to achieve basic UI functionality with current web standards and browsers. Even worse, it fails to respect basic software engineering principles such as DRY (don't repeat yourself), encapsulation, ..
(check out the "source" tab of the link above to get an impression of the mess required to create a simple table demo component).

This is not the fault of the libraries mentioned above, the root cause of this mess are the underlying half baked W3C "standards" (+ browser implementations). They are apparently defined by people never involved in real world application development.

So we sit there with an intact hype, but without a productive development stack to fulfil the vision. Since management tends to share the hype but does not validate technical feasibility, this led to some prominent mis-decisions such as Steve Jobs claiming WebApps can be used on the iPhone instead of native apps (first iPhone release had no native APIs), another example is facebook relying on html5 too much, now moving back to native phone apps hastily.

Following I'll explain why I think we urgently need the paradigm shift in Web-Applications. Without a fundamental change, industry will keep burning money trying to build WebApplications based on expensive , crappy, half-baked technology.

In the beginning there was REST

and it sucked right away ..


This allowed WebGUIs to max out on bandwidth inefficiency and latency. It also leads to usability nuggets by losing subtle GUI state (such as scrollbar position or the longish forum post you started to write).

JavaScript, Ajax and "Look ma, a menu in the browser"

Innovation (& browser wars) never sleep. Industry leading companies and consortium's figured out, that the best way to address fundamental design issues is to provide many many many workarounds on top of it.

Examples:
These are kludges (some of them with notable negative side effects) addressing fundamental issues of an overly simplistic foundation technology. So we got, what I call the MESS technology stack:

The MESS principles also infiltrated server side frameworks, as they had to deal with the MESS somehow. I'd speculate some of the frameworks are 90% "mess-handlers', designed to virtualize a solid engineered foundation in order to increase productivity when messing with the MESS.

Google to the rescue !!

One can safely assume apple and microsoft are not *that* interested in providing a fluid web application platform. If all applications would be WebApplications, the importance of the underlying operation system dwindles. All a user needs, is a compliant browser (hello Chrome OS).

Google as a major web application implementor/provider suffer them self from the high.cost@low-quality.webapp syndrome.

Some clever JavaScript hackers (<= positive) started to figure out a simplified, more flexible web application design. They basically implemented a "Fat Client" in JavaScript. Instead of doing page-reloading Http requests, they used Async Http to retrieve data from the server and rendered this data by modifying parts of the displayed html document (via DOM). Whenever you see a responsive 'cool' web application, you can safely assume it relies on this approach.

However JavaScript is not designed to work well at large business applications with many lines of code and fluctuation of development staff as typical for enterprise software development. It becomes a maintenance nightmare for sure (if the project succeeds at all) or a minimalistic solution hated by end-users.

The first widely known step in backing up the hype with a structured technology was the Google Widget Toolkit, which relied on compiling ("transpiling") java to browser compatible JavaScript.
For various reasons, this project has been stalled (but not dropped) by Google in favour of their new Dart language before the technology reached a 'mature' state. It has been reported that turn-around times get unacceptable with larger applications and its unlikely this will change (because resources have been moved to Dart). Remembering the law suit of Oracle against use of Java in Android, this move of Google is not too surprising. 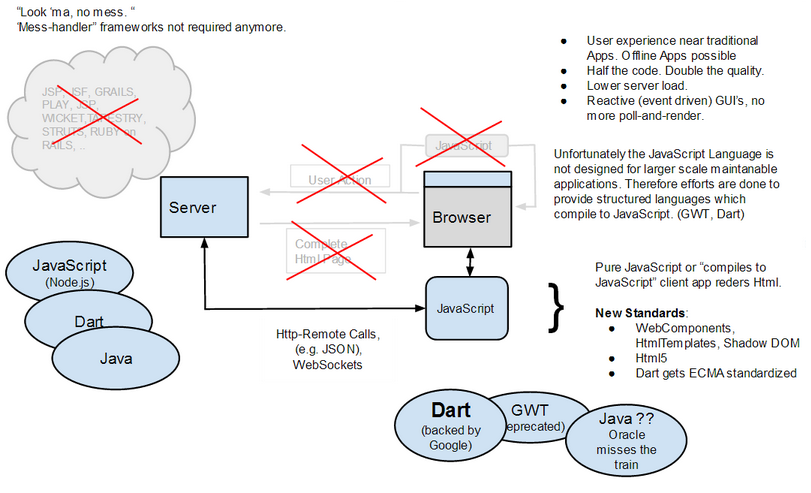 Dart has the potential to reach a level of convenience which has been there for native apps for years:

Mankind not only is capable to build chips with 800 million transistors, it also might be capable creating standards defined by 800 million words .. scary ;-) .

While the Scala guys join the party late http://www.scala-lang.org/news/2013/11/29/announcing-scala-js-v0.1.html, Oracle misses the train and seems to favour JavaFX as a GUI platform (my prediction: Will fall asleep prior to reaching maturity).
GWT has been open sourced, so maybe the community will do further development. Given that there are more open source projects than developers willing to contribute, I doubt this will be able to keep pace with Google's money backed Dart. Also I could imagine the (aging) Java community shys away from (partially) deprecating their habitual server side framework landscape.

There is also http://qooxdoo.org/contrib/project/qwt/about/java backed by a bigger german hosting company. I have not tested this, but I doubt that pure community driven development will keep pace. Being compliant to ever changing draft specs and dealing with browser implementation variance is not fun ...

What's required is a byte-code to JavaScript transpiler.
The browser API (DOM access) could be modeled by a set of interfaces at compile time and replaced by the transpiler with the appropriate javascript calls.
Using static bytecode analysis or by tracking required classes at runtime, the set of required transpiled classes/methods could be found. Additionally one would need a fall-back transpiler at runtime. If a client side script instantiates an "un-transpiled" java class or method, it could be transpiled on-the-fly at server side and loaded to the client.
Nice thing of such a bytecode level transpiler would be, that all VM-based languages (groovy, scala, jruby, jphyton, ..) could profit from such a system.

Example of a possible Java2JavaScript transpiling solution: Since Java is a wide spread server platform, a java2js transpiler could work dynamically, which is a major strategic advantage over Dart, which needs to use static analysis & compilation because most server systems are not running native dart.

There needs to be put real money on such a Java solution, with slow moving JCP we probably can expect something like this 2016 or later ...
Would be fun building such a transpiler system .. but no time - gotta mess with the MESS.

Update: The J2EE java 8 project seems to adapt to new 'thin' webapp architecture with project "Avatar". I still haven't figured out the details. On a first glance it looks like they bring JS to the server instead of bringing Java transpilation to the client .. which is a mad idea imho :-).

Update on GWT: A google engineer answered back on GWT telling me the project is alive and is in active development. It turns out Dart and GWT are handled by distinct (competing?) divisions of google. There still is evidence, that Dart receives the real money while GWT is handed over to the community. Google plans to bring native DartVM to chrome within ~1 year (rumours) and plans on delivering the DartVM to Android also.

Posted by Rüdiger Möller at 7:39 PM