Don't REST ! Revisiting RPC performance and where Fowler might have been wrong ..

[Edit: Title is a click bait of course, Fowler is aware of the async/sync issues, recently posted http://martinfowler.com/articles/microservice-trade-offs.html with clarifying section regarding async. ]

With distributed applications, there comes the need for ordered point to point message passing. This is different to client/server relations, where many clients send requests at low rate and the server can choose to scale using multiple threads processing requests concurrently.

(guess what is one of the most optimized areas in the JVM: method invocation)


[Edit: with "REST", I also refer to HTTP based webservice style API, this somewhat imprecise]

There were various attempts at building high-level, location transparent abstractions (e.g. corba, distributed objects), however in general those idea's have not received broad acceptance.

Though not explicitely written, the article implies synchronous remote calls, where a sender blocks and waits for a remote result to arrive thereby including cost of a full network roundtrip for each remote call performed.


is not significantly faster than 2 "fine grained" calls


as both variants include network round trip latency only once.

On the other hand with synchronous remote calls, every single remote method call has a penalty of one network round trip, and only then Fowlers arguments hold.

Another element changing the picture is the availability of "Spores", a snippet of code which can be passed over the network and executed at receiver side e.g.


Spore's are implementable effectively with availability of VM's and JIT compilation.

Actor Systems and similar asynchronous message passing approaches have gained popularity in recent years. Main motivation was to ease concurrency and the insight that multithreading with shared data does not scale well and is hard to master in an industrial grade software development environment.

Following I'll test performance of remote invocations of some frameworks. I'd like to proof that established frameworks are far from what is technically possible and want to show that popular technology choices such as REST are fundamentally inept to form the foundation of large and fine grained distributed applications.

Disclaimer: As tested products are of medium to high complexity, there is danger of misconfiguration or test errors, so if anybody has a (verfied) improvement to one of the testcases, just drop me a comment or file an issue to the github repository containing the tests:

I verified by googling forums etc. that numbers are roughly in line with what others have observed.

Features I expect from a distributed application framework:

products tested (Disclaimer: I am the author of kontraktor):

I took a standard remoting example:

The sender sends a message of two numbers, the remote receiver answers with the sum of those 2 numbers. The remoting layer has to track and match requests and responses as there can be tens of thousand "in-flight".

Sender sends fire-and forget. No reply is sent from the receiver.

Platform: Linux Centos 7 dual socket 20 real cores @2.5 GHZ, 64GB ram. As the tests are ordered point to point, none of the tests made use of more than 4 cores. 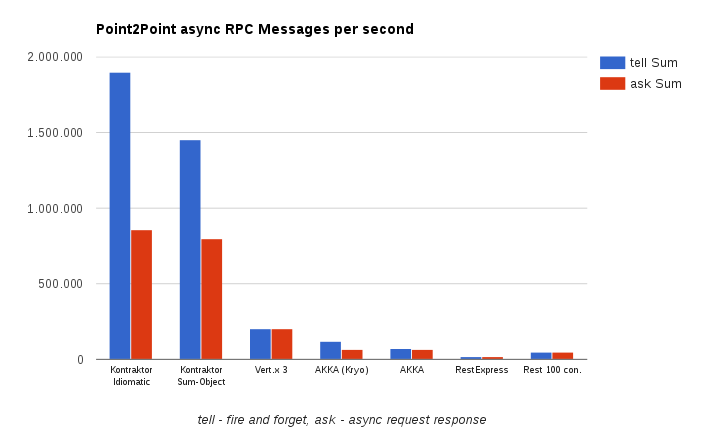 Sending millions of messages as fast as possible can be tricky to implement in a non-blocking environment. A naive send loop
Of course this is a synthetic test case, however similar situations exist e.g. when streaming large query results or sending large blob's to other node's (e.g. init with reference data).

None of the libraries (except rest) did that out of the box:

Why is kontraktor remoting that faster ?
Kontraktor actually is far from optimal. It still generates and serializes a "MethodCall() { int targetId, [..], String methodName, Object args[]}" for each message remoted. It does not use Externalizable or other ways of bypassing generic (fast-)serialization.
Throughputs beyond 10 million remote method invocations/sec have been proved possible at cost of a certain fragility + complexity (unique id's and distributed systems ...) + manual marshalling optimizations.